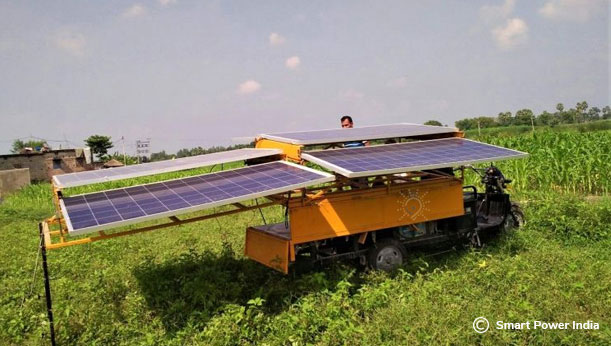 A group of private companies is pioneering a new approach to powering the agricultural industry in rural India that could significantly increase productivity of small-holder farmers, by combining mobile and stationary solar-powered mini-grids and linking them to a range of agricultural services, beginning with irrigation. Claro Energy is at the center of the new initiative, piloting an “irrigation-as-a-service” business model in Bihar state that is already being used by dozens of farmers, according to the company’s head of Institutional Business, Sonal Adlakha. Claro, in collaboration with Smart Power India (SPI), an initiative established by The Rockefeller Foundation, is also working with private utilities at about 10 mini-grid sites, including Husk Power Systems and other SPI partner developers, and is experimenting with how irrigation can serve as an “anchor load” for existing or new mini-grids.

Many of India’s small-holder farmers grow crops on less than an acre of land, often on plots that are not connected to one another. In addition, they have traditionally rented expensive diesel pumps for their irrigation needs, reducing profitability and productivity.

Irrigation is just the start for Claro, which has installed or maintains over 8,000 systems in India. The new model is focused on powering a wide range of income-generating uses of electricity in agriculture, such as cold storage, honey processing, milk chilling, oil expelling, rice hulling, water treatment and spice grinding. By delivering reliable, stable power, rural communities can get a much needed boost for micro-enterprises, fostering socio-economic growth in the form of income generation and job creation.

Apart from integrating irrigation and other agro-processing into stationary mini-grids (which have capacity ranging from 17 to 40 kW), Claro has also pioneered a mobile irrigation service, retrofitting e-rickshaws with solar panels that can get to remote villages and provide irrigation on a pay-per-use basis.

“One of the biggest roadblocks to sustainable agriculture in India, especially in the northern belt of India, is poor agriculture yield for farmers. Heavy reliance on diesel for irrigation and small farmer landholding are the primary cause for this,” says Samit Mitra, director, Demand and Innovation, Smart Power India. “This spurred Smart Power India’s Innovation team along with Claro to explore how irrigation can serve as an ‘anchor load’ for mini-grids to provide reliable irrigation to farmers at 30% less cost than diesel-based pumping.”

“It has been a rewarding experience to be able to successfully harness the power from renewable energy-based mini-grids to provide irrigation service to farmers. This has enabled them to increase their irrigation intensity, adopt multi-cropping and substantially drive their income levels. Driven by mini-grids, the irrigation-as-a-service model has the potential to change the irrigation landscape in India,” he adds.

Claro’s IoT and power electronics also allow for remote monitoring of the mini-grids and trolleys, and the company has developed a mobile app allowing farmers to schedule and pay for irrigation from their smartphones. It also provides a toll-free number for farmers for extending continued assistance in booking and using this service.

Besides the new technology and service platform, Claro is also working at the grassroots level to help farmers adopt better practices, and efficiently utilize the electricity generated from solar panels to uncover further opportunities. For example, Claro is advising farmers to incorporate a third crop to their normal rotation of two crops, during previously fallow months. In an emerging economy such as India’s that is largely comprised of rural areas, and heavily dependent on the agricultural sector, such interventions could pave the way to improved livelihoods.

According to a 2017 Bloomberg New Energy Finance report, a total capital expenditure of US$60 billion is required to replace the 20 million currently installed power and diesel irrigation pumps in India with solar. The report also said that annual consumption of diesel by 8 million diesel pumps in India each year was worth US$11 billion.