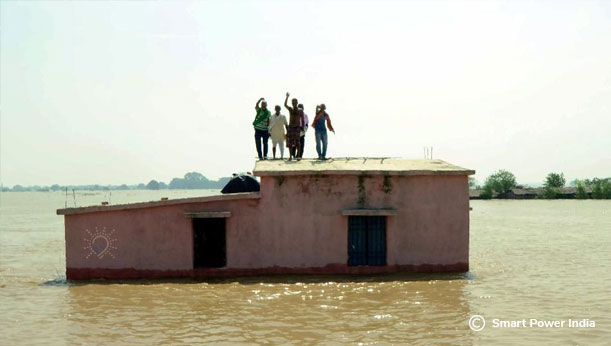 People stand on the roof of a submerged house as they wait to be rescued in Patna, in the eastern Indian state of Bihar. (Photo credit Getty Images)

Recently, deadly floods in India and South Asia and powerful storms in United States knocked out power to millions. But when people’s lives are thrown into chaos by devastating natural disaster, using alternative energy source may not seem like an obvious response. However, since energy grids are often the first to fail when a disaster hits, and outages hamper recovery efforts, energy entrepreneurs believe that off-grid renewable energy could provide an instant source of power to those who need it most.

“After a natural disaster hits, it can take weeks or longer for power to be restored and the expense of repairing transmission lines can be very high. Solar and battery mini-grids are a more resilient solution, as it allows local and remote communities to regain access to power, clean drinking water, medical facilities and communications immediately,” says William Brent, director of Power For All, a coalition of 200 public and private organizations campaigning to deliver universal energy access by 2030.

“Also, in the case of renewable mini-grids, the fuel — the Sun — is local, unlike diesel generators, which are subject to disruption in fuel supply because of a disaster,” adds Brent

In August, Bihar, one of the poorest states in India, faced its worst flooding in decades, affecting 13 million people. With uncertainty about the availability of grid power, renewable energy mini-grids — Tara Urja and Desi Power — stepped up to provide back-up power and assist with relief operations in eight villages, including Nabiganj, Siwan and Araria. ?Tara Urja and Desi Power are private energy service companies working with the Smart Power India, an initiative funded by Rockefeller Foundation to help scale mini-grids in India.

“In Bihar, mini-grids and battery energy ensured relief operation was not hampered due to power outages, and the affected villages were not plunged into darkness by night,” says Mukesh Khandelwal, COO of Tara Urja, “Our electricians maintained a round-the-clock watch during the peak days of flooding to make sure that the village-level office received electricity through a feeder line to coordinate relief operations,” adds Khandelwal.

In Araria, a village in Bihar that was under three feet of water, Desi Power provided over 16,000 people to power a range of standard appliances. “Even when villages were submerged and grid connectivity was off, we also had to shut down the grid, but the plant was kept open to help people access essential services such as charging mobile phones and solar lantern from our battery backup,” says Kunal Amitav, COO for Desi Power. “The plant area was also opened up to provide shelter to people, as it was on a slightly higher ground.”

Apart from the mini-grids, Desi Power operates around 40 pico-grids, a small portable system, which users can plug their phones into to charge, to light up homes, and purify drinking water. “In Aamgachi, a village that was under five feet under flood water, each pico-grid plant supported about 25 households,” says Amitav.

Since water contamination is a concern after flood, Desi Power, with Smart Power India, has set up a water treatment plant to provide clean drinking water to the villages for six months. Apart from Bihar, local mini-grids also provided uninterrupted power in flood-affected villages in the northern state of Uttar Pradesh and Jharkhand.

But off-grid power is not only needed in times of natural disasters. The most poverty-stricken regions of India lack access to continuous power. ?“Electricity supply to rural parts of Bihar, Uttar Pradesh and Jharkhand are erratic at best. Over the years, micro-enterprises in villages have been relying on mini-grids for power supply,” says Khandelwal.

Renewable energy resources are still in its nascent stage in India. The Indian government has set a target of 10,000 mini-grids by 2021, as over 300 million people live in total blackout in the country. So far, private energy service companies and Smart Power India have built 111 projects.

According to Khandelwal, decentralized renewable energy is the only way to bring electricity to India’s poorest and most vulnerable regions. “In Bihar, solar-powered mini-grids are used across several villages. Currently, these mini-grids are off-grid but have the potential to be integrated with the grid to offer seamless power during outages.”

Communities take a punch when the lights go out. And the growing intensity of floods and storms on account of climate change is making things even worse. Is frequent natural disasters then driving home the value of off-grid energy systems? Resilience, Brent says, is increasingly becoming important to the security and reliability of energy systems amid the rise of extreme weather events. “Mini and micro-grids can create a strong infrastructure for universities, hospitals, industrial parks, and communities. Individual mini-grids can join up to form a single utility grid or can also isolate from the grid and operate independently in case of disaster. This also allows easier integration of distributed and renewable generation,” adds Brent.

I am interested in ideas and enterprises — in all shapes, sizes and guises, whether well-cooked or medium-rare. After working for most of my career in Dubai in different newspapers, including Gulf News, I relocated to India and worked for The Times Group in Pune. During my …