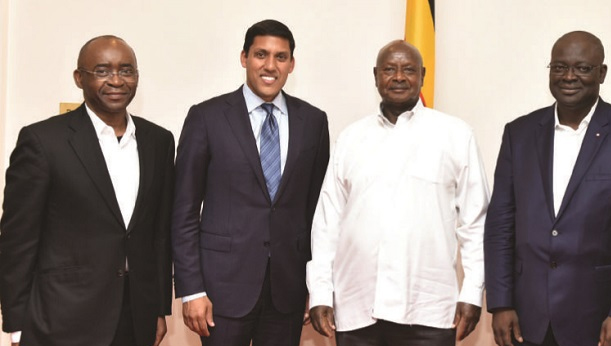 Rockefeller Foundation President, Dr. Rajiv Shah (2nd L) and his delegation with President Yoweri Museveni (in a white shirt) at State House, Entebbe on May 23.

Shah, who was in Uganda on May 23, revealed this after discussions with President Yoweri Museveni at State-House, Entebbe, Their meeting was attended by business leaders, and Foundation grantees to understand how the charity organisation can best contribute to fostering economic opportunity, and human rights and dignity.

In India, Rockefeller invested US$75 million and created a new organisation—Smart Power India—to expand the Smart Power model which uses mini-grid technology for both lighting and productive use.

The Rockefeller initiative is based on data showing that round the world, 1.3 billion people lack access to electricity. In Uganda, only 20 % of the country’s households have access to electricity, according to the Uganda Bureau of Statistics, the lowest in East Africa outside of Burundi.

The Rockefeller Foundation, which has a net worth of about US$3.5 billion, has since 1913 worked “to promote the well-being of humanity throughout the world” by advancing health, revaluing ecosystems, securing livelihoods, and transforming. Rockefeller believes that while livelihoods of people around the world are threatened by demographic shifts and economic stresses, Africa’s faces a growing youth bulge.

In the meeting with Shah, President Museveni said Rockefeller could also support Uganda’s agriculture sector, solar power, research centres, and infrastructure. In Agriculture which supports 80% of the population, Museveni pointed out the fight against vectors like ticks in livestock.

“Our target is to have vaccines against tick-borne diseases developed. We shall be pleased if you could support us in this effort. If we can vaccinate, we shall have the capacity to protect the livestock without using acaricides,” Museveni told Shah.

Museveni said the Foundation could also support the country in the development of solar powered pumps for irrigation to enable year round food production by farmers. He said the government is committed to promoting use of solar water pumps and rural lighting and that promotion of the private sector led-growth requires availability of low cost infrastructure.

The Rockefeller Foundation’s involvement in Uganda dates back to the 1930s with investments in health and education. An early partnership was the establishment of the Uganda Virus Research Institute (UVRI).

This was followed up with the discovery of what would later be known as Zika virus in the 1940’s at the Institute by Ugandan scientists.

Similarly, the Foundation helped found the world-renowned Makerere University and offered aid towards the development of agriculture, public health, medicine, and social science departments in universities across Africa.

In the agriculture sector, the Foundation’s investments in agriculture in the country goes back many years, with the more recent being the support for the Alliance for a Green Revolution in Africa (AGRA).

Co-launched with the Bill & Melinda Gates Foundation, the organisation has resulted in AGRA directing more than US $30 million investments across key areas, including markets, better seeds, and improving soil fertility and health on the continent.

This has allowed AGRA to develop an array of networks from farmers through to private sector actors along the value chains up until the highest levels of government.

More than 175,000 farmers have received trainings in post-harvest management, reducing their losses by 15% and supported 18 doctoral students in seed breeding. In addition, more than 700 agro dealers have received certification to sell crop-enhancements to farmers.