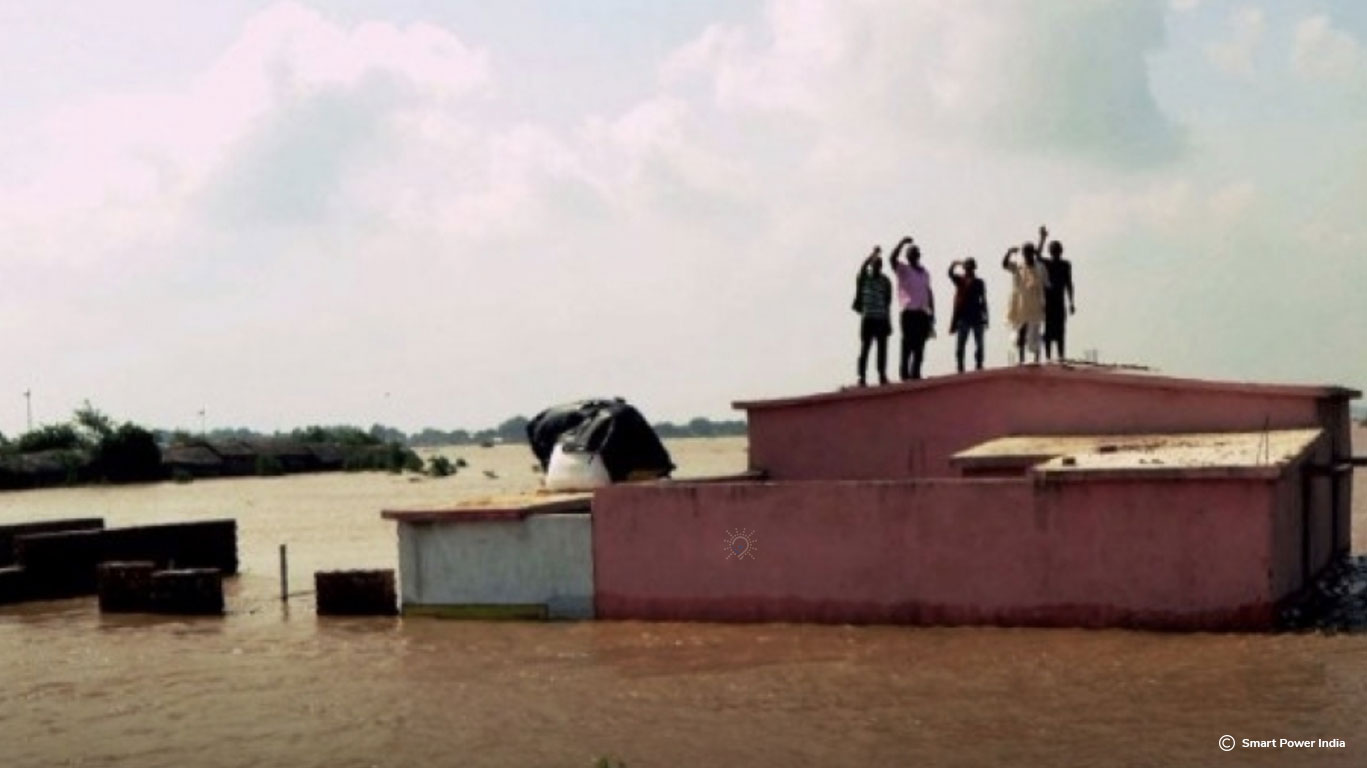 Ashish Mishra recalled how a renewable energy-based mini-grid proved to be boon while managing relief and rescue operations last month, when the devastating floods in northern Bihar were at their peak.

When there was no power supply from the grid, uninterrupted power supply from the mini-grid of Tara Urja helped us to operate smoothly to manage flood relief work, and ensure our connection to officials of district headquarters of Siwan and state disaster management department in Patna. The top government official of the block said relief coordination during flood could have been badly affected without electricity. “We had lost hope to coordinate flood relief and rescue operations without power, after the electricity grid was damaged by the flood,” he told indiaclimatedialogue.net.
“But thanks to power supply from mini grid, our computers, fax machine, internet and mobile phones operated as usual, which helped us to work for flood relief without any interruption.”
If there had been no power supply from the mini-grid, Mishra would have been forced to use highly polluting diesel or kerosene generators.

Decentralised power generation has a role to play in increasing resilience to disasters in all countries, not just those with energy access challenges. Decentralisation means that the entire network is not interrupted when one weak point fails. A grid-linked mini-grid, for example, can disconnect and continue to operate uninterrupted. A solar home system, or solar lantern, can help a household weather a crisis.
Resilience to disaster includes the speed of recovery. Decentralised generation means that rebuilding efforts can focus on the highest priorities, for example, quickly rebuilding a hospital’s mini-grid. In contrast, a centralised grid requires resurrecting the entire network in order to power essential services.
Harihar Mandal, a marginal farmer living in a village under Jokihat block in Araria district, remembered that when they were without power during the flood, power supply from the mini-grid helped them to charge their mobile phones and light their houses at night. Araria was one of the worst affected by the flood in 2017.
Power supply from the solar plant helped us to charge our mobile phones and enabled us keep in touch with others,” Mandal told indiaclimatedialogue.net. “It was something that was not possible earlier.”

Bihar faced its worst floods in recent decades this year, with 514 deaths reported by the Bihar Disaster Management Department (BDMD).
The floods affected more than 17 million people living in 187 administrative blocks in 19 districts, official data shows.
Tara Urja, a private energy service partner of Smart Power India, is operating a 30 KW solar power plant in Lakri Nabiganj. Smart Power India implements the Smart Power for Rural Development (SPRD) programme, which is designed to deliver viable electricity solutions through decentralised renewable energy mini-grids.
Tara Urja, which offers a reliable source of electricity, has hundreds of customers, including the block development office, other government offices, shopkeepers and private houses.
The consumers particularly benefit in the evenings, which is the peak hour, and when power outages from the grid is common. “We provide power to the local community, including the block development office, which uses mini-grid power during the hours when they receive no grid-connected power,” Mukesh Khandelwal, Chief Operating Officer of Tara Urja, told indiaclimatedialogue.net.
Mandal, a resident of Baharbari village, praised Decentralised Energy Systems India (DESI Power), another energy service company, for providing free mobile charging facility and domestic lightning during the floods. “We were without power for over a week, as power supply from grid was disrupted due to flood, but Desi Power’s mini-grid supply made it possible for us to not go back to the lantern age.”
We have been operating 49 solar plants in 15 villages in Jokihat. DESI Power’s mini-grid with capacities of 0.5 Kw to 75 Kw are operating in the villages.”

Amitabh said DESI Power managed to provide electricity to people in villages during the floods, as mini plants are portable and easy to shift from one place to another. “After the flood hit, we have shifted our portable mini plant either to the rooftops or to the first floors of buildings and continued to provide power supply to households.”
“Soon, we are planning to add some smaller decentralised, or one or two big centralised RO drinking water facility in some of our other plant sites. One centralised drinking water facility is already under planning stage in Chakai village near our plant.”
Dharamraj Singh, head of Tara Urja in Bihar, said BDO Mishra had sought help for uninterrupted power supply from their mini-grid to ensure that electricity supply to the office coordinating flood relief efforts was not affected.
It was in the third week of August when dozens of villages in Hardiya, Nabiganj and Dumarsan received severe flood alerts due to rising water levels of the Gandak river. Soon, floodwater entered villages and forced the state government to set up relief camps for displaced residents. Tara Urja has eight plants in Gopalganj, Saran and Siwan districts of Bihar.
We relied on their electricity for over 50 hours during the floods.
“When nine of the 11 panchayats comprising of dozens of villages in our block were severely affected by the floods, we sought the help of Tara Urja’s mini-grid to assist us with flood relief work,” Mishra told indiaclimatedialogue.net.
This story was originally published on India Climate Dialogue.