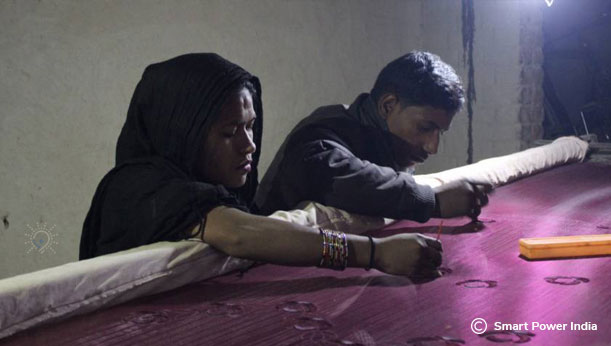 In her village of Komalia, the fog swirls so thick at 7 a.m. that Akansha Singh can see no more than 15 meters ahead. But the 20-year-old is already cycling to her workplace, 9 kilometers away. Halfway there she stops for two hours at a computer training center, where she is learning internet skills. Then she is off again, and by 10 a.m. reaches the small garment manufacturing plant where she stitches women’s clothing for high-end brands on state-of-the-art electric sewing machines. Solar energy powers most of her day — the training center and the 25-woman garment factory run on solar minigrid electricity — and clean power has given her personal choice as well, she said.
If the minigrid system had not been put in place, Singh — a recent college graduate without funds to pursue training as a teacher, the only job open to women in her village — would have had no alternative but to marry. “I would already be married off,” she said in an interview.

Today, however, she earns 4,500 rupees ($70) a month working on solar-powered sewing machines. She uses part of that to pay 300 rupees ($4.70) a month for her computer education class — and is planning to start a computer training center closer to home. Like her, most of the women at the factory earn between 2,500 and 4,500 rupees ($39 to $70) a month, which has helped their families eat better, get children to school and pay for health care.

“With a month’s earning alone, we can buy new bicycles for ourselves and our school-going children,” said Bandana Devi, a mother of four, as she looked up from her sewing. She bought one for her 12-year-old daughter, she said, and her 6-year-old rides tandem with her to the school, 2 km away.

Prime Minister Narendra Modi has announced a $2.5 billion plan to electrify every Indian household by 2019 — a huge task in a country where close to 240 million people still have no access to electrical power. Solar power — including the use of small local grids — is likely to be a big part of the push, with 60 percent of new connections expected to be to renewable power, according to a report by the International Energy Agency. In a clearing in an acacia plantation, the more than 140 solar panels that make up the Kamlapur minigrid are being cleaned early in the morning.

Solar minigrids usually rely on one or two large users of power — often mobile phone towers — to provide a stable base revenue for the system. But as solar electricity becomes available in areas beyond the traditional grid, power-hungry small businesses are emerging that could become anchors.

Kamlapur’s garment factory, for instance, consumes 10 kilowatts of power each day — the same as the telecom towers, said Ketan Bhatt, an OMC official in Uttar Pradesh state. The state in 2016 became India’s first to put in place a minigrid policy, recognizing private solar companies as legitimate players in India’s push to get power to all.

Company owners, in turn, say solar minigrids — which can be more reliable than the unstable grid power their competitors rely on — is giving them a business advantage. “Because the power supply is steady, we are regularly able to deliver on contract deadlines, which in turn enhances our reputation to bag more contracts,” said Mohammad Riyaz, who set up the Kamlapur garment unit in 2016.

Rohit Chandra, a co-founder of OMC, said he is seeing many solar-power users moving beyond simply buying power for home-lighting and appliances. Now, he said, they are harnessing solar energy for profit.

“We see barbers installing televisions and fans in their shops to attract more customers. Carpenters buy electric saws and wood-polishers. Fruit-sellers are adding electric juicers. Health centers and dispensaries are coming up in underserved villages too,” Chandra said in a telephone interview. “People are now continuously climbing.”

Sangeeta Singh of the Uttar Pradesh New and Renewable Energy Development Agency said rural villagers “are willing to pay for assured, customized hours of supply, even at a higher price.” “The myth that rural consumers will not pay for electricity is now demolished,” added Jaideep Mukherji, the CEO of Smart Power India (SPI). “Over the last two years we’ve discovered not only do rural consumers pay for the electricity, 93 percent pay on time.”

SPI is backed by the U.S.-based Rockefeller Foundation’s $75 million Smart Power for Rural Development initiative, which aims to get power to the “last mile” of users without it in India, Myanmar and sub-Saharan Africa.

The aim is both to improve life for poor people in power-hungry regions and help make sure solar minigrid power is financially feasible for its operators, Mukherji said.

Chandra, of OMC, said that, on average, after supplying reliable power for a year, “we see around 30 microenterprises come up in each village.” Though most are expansions of existing businesses, some are new ventures — such as a new water-purifying plant in Kamlapur. Sanskrit language teacher Aparna Mishra has just invested 400,000 rupees ($6,240) to set up a reverse-osmosis water purifier. Starting later this month, 100 customers — including schools, hotels and homes in the area — will begin receiving refillable 20-liter jars of water, dropped off at their doorstep, the entrepreneur said.

Mishra’s two-year target is to produce 3,000 liters of clean water a day, delivered over a 12-km radius from the 5-kilowatt plant. “If villagers can understand the link between good health and clean drinking water from my plant, that itself is the biggest return on my investment,” the 26-year-old said. An assessment of Smart Power India villages at the end of 2016 found that after two years of access to minigrid power, small businesses using it had increased their monthly income by 13 percent.

While Smart Power India is reaching a growing share of communities without electricity, a 2017 study by the International Center for Research on Women found that large numbers of women and poor families still lack access to clean energy, even in areas where it is available. For some of them, the cost of private minigrid power is a deterrent to using it.

Riyaz’s clothing factory, for instance, pays 25 rupees (39 cents) for each kilowatt of the 10 kilowatts of power it uses each day — well above the 11 to 17 rupees that rural users of grid power pay. “The electricity bill pinches,” the 45-year-old tailor said. Chandra, of OMC, admitted that “on the face of it, our charges for reliable power might look high.”

But grid power users in Uttar Pradesh must pay a minimum monthly fee of 1,000 rupees, he said. With many small solar businesses — such as phone-recharging — using less power, and even larger businesses often saving energy by using efficient machines, solar minigrid power can come out cheaper, he said.